Welcome to our new catalog!

For security purposes, all library catalog passwords have been reset. To update your password, click HERE. You may also come in person or contact Euless library staff via chat or by phone at 817-685-1480 for assistance. 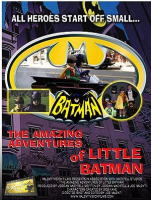 Also in this Series

Other Editions and Formats

Participants/Performers
Troy Baker, Kevin Conroy, Martin Jarvis, Hynden Walch, C.C.H. Pounder.
Description
When the government teams up a group of supervillains with the code name Suicide Squad and forces them to break into Arkham Asylum to bring back top secret information the Riddler has stolen, Batman soon becomes involved. But things go from bad to worse when one of the Squad (Harley Quinn) frees the Joker, who has the means to not only blow up the asylum, but most of Gotham City as well.
Target Audience
Rated PG-13.
System Details
Blu-ray.
Language
English; English, French, or Spanish dialogue and subtitles.

Note! Citations contain only title, author, edition, publisher, and year published. Citations should be used as a guideline and should be double checked for accuracy. Citation formats are based on standards as of August 2021.
Powered By Aspen Discovery supported by ByWater Solutions
v. 23.01.02
CONNECT WITH US
Loading, please wait
...
chat loading...